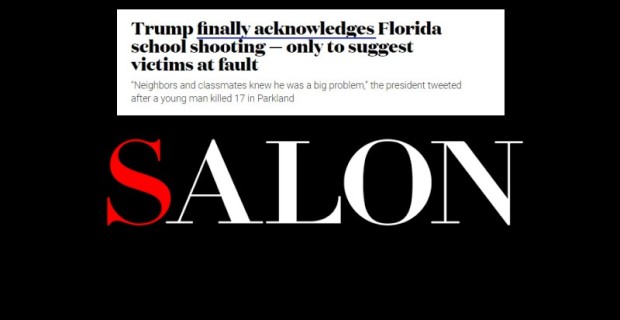 In a brazen example of media bias, Salon.com claimed that President Trump's first response to the horrific school shooting in Florida was to blame the victims.

This is a demonstrably provable lie.

Trump 'broke his silence' on the Florida shooting the day before, when he tweeted, "My prayers and condolences to the families of the victims of the terrible Florida shooting. No child, teacher or anyone else should ever feel unsafe in an American school."

He then followed up with a second tweet offering help to Florida Governor Rick Scott.

Salon's claim that Trump's first response to the shooting didn't take place until Thursday morning was an outright lie, and Salon had to change the article after it was published to reflect that (without issuing any retraction).