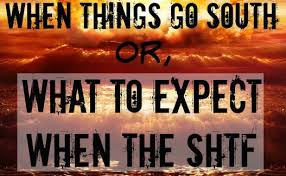 I was recently emailing back and forth with Selco and we were discussing the situation in the US right now, with the political polarization, the rage, and the general cognitive dissonance. I asked him if he saw any similarities between our situation and the one in Bosnia when the SHTF there during the war. When he replied I knew I had to share this information with you.

While we might like to think it could never happen here, the current events here are eerily similar to what happened there in the 1990s.

When you read this. think about recent events. The anger about immigration. The destruction of Civil War monuments. The unease between the races. The deep rage about the recent presidential election. The scorn and derision for neighbors who think differently. The way the media fans the flames of dissent between our fellow Americans.

You'll realize that it definitely CAN happen to us…and there's not one darn thing we can do except to be prepared.

What parallels do you see with events in the US and Bosnia before the SHTF?

This is true but only on first look.

Yugoslavia had somewhere around 20-22 million citizens, six republics (similar to states in the US), 3-4 main religions, and many national groups (ethnicity).

The official state policy was to build Yugoslavian "nationality" (from the end of WW1) and through different ways that effort was successful until the 90s.

We were "something big, united through differences with a strong connection to make something big."

And then those differences were used to make chaos.

In the late 80s and beginning of the 90s (when democracy came) the problems started and ended up in series of wars and cases of complete collapse.

Young Idealists Go Off the Grid, Get Smeared as Bigots in a 'Cult'

How to find the perfect campsite this weekend in 7 minutes or less!

Make the CRISPEST, CRUNCHIEST Canned Pickles EVER! (Use THIS Method)

The Must Have Sine Wave Inverter, The Real Secret To Solar Power

Can Solar Alone Get You Off The Grid?

Build Your Own Solar-Powered Backup System

How to Stay Clean While Camping (Hygiene Tips)

Tips for conserving water on your homestead

7 Simple Tips To Keep Mosquitoes Away From Your Camp