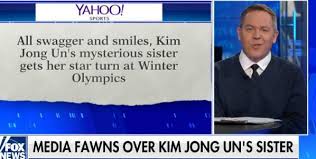 (Natural News) Remember how I said that the Washington Post is a traitorous, anti-American, propaganda-laced "journo-terrorism" organization? Their coverage of the Olympics proves it, as WashPost joins NPR, ABC, NBC, CNN, the NYT and other left-wing propaganda rags in praising the murderous North Korean regime.

You know why they praise North Korea? Because that's the kind of totalitarian society they want in the United States, run by radical left-wing tyrants like Hillary Clinton or Barack Obama. These are the same lying, left-wing propaganda rags that routinely attack the Constitution, the American flag, America's founders, U.S. military veterans, Democracy and President Trump. But they praise North Korea's murderous regime which relies on state-run media mind control over its population to remain in power.

As Truth Revolt points out:

The American news media are so consumed by hatred of their mortal foe Donald Trump that they turn a blind eye to the evil lunatic behind quite possibly the world's most brutal regime, a man who has threatened to rain nuclear weapons down on America, and instead hype its presence at the Olympics as a diplomatic success. The left-dominated media would rather chastise Trump for standing up to Kim, because the left's instinct is Blame America First, and because the left refuses to recognize totalitarian evil.

Why are none of us surprised that the discredited Washington Post would praise a murderous, dictatorial regime kept in power by media propaganda? That's the only way Leftists can stay in power: By censoring the truth and brainwashing the people into believing that misery, destitution, corruption and tyranny are all "utopia." (See my related article Believing in "progressivism" requires the complete abandonment of reality, logic, science and reason…)

Breitbart.com's John Nolte nails the rest of this story in his own article entitled 15 Media Outlets that Colluded with North Korea to Romanticize Their Slave State:

Now that normal Americans have completely written off the disgraced institution of the American media, these amoral news outlets have been forced to pander to the only audience they have left — the far-left.