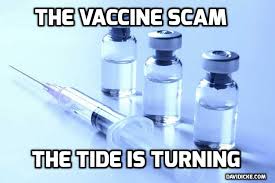 (Natural News) Children are dying from the flu all across America, according to media reports. What the media isn't reporting, however, is how many of the children who died were also vaccine recipients. Make no mistake: If only unvaccinated children were dying from the flu, that would be the headline everywhere: "Unvaccinated Children Dying Across America" or even "Flu Shot Saves Children from Deadly Influenza." But of course you're not seeing those headlines for the simple reason that vaccinated children are among those who are being killed by this year's flu.

"The dominant Influenza strain this year is H3N2. This particular strain has a history of causing more hospitalizations and more deaths," reports The Organic Prepper. "In addition to H3N2 producing a more serious infection in general, this year's particular H3N2 influenza virus is particularly virulent."

This year's flu has reportedly killed 44,116 people, according to the CDC. The number of children so far killed by this year's flu is 37, say CDC statistics. The flu vaccine, widely touted by the clueless media as being some sort of magical "bulletproof vest" against influenza infections, is approaching zero effectiveness.

Via The Organic Prepper:

You mean to tell me the CDC already knows that this year's vaccine is only 10% effective at protecting children from the influenza strains circulating in the wild? According to CBS News:

This year's flu vaccine may only be 10% effective, experts warn… It is the same formulation that was used during Australia's most recent flu season — which typically sets a pattern for what the U.S. will face — and it was only 10 percent effective there.