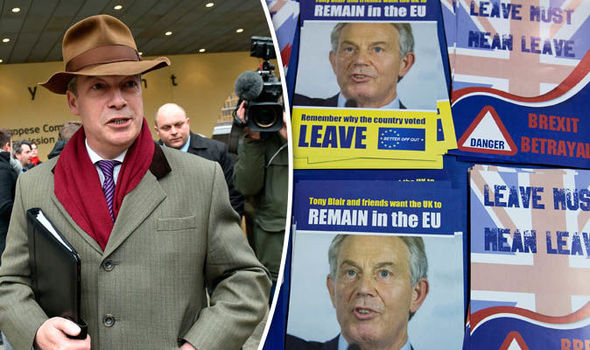 The former Ukip leader tweeted: "It's the last thing I've ever wanted but I fear it may be forced upon us.

"We have to be prepared."

He claimed a second vote would see an even bigger majority for the Leave campaign and silence the "whingeing" of Remainers for a generation.

But he said it was vital that Brexiteers began organising to see off the challenge from hardline EU supporters such as Tony Blair, Sir Nick Clegg and former Labour minister Lord Adonis.

"It would be naive to allow Remain organisations to build up war chests, get their campaigns going, get their negative messages out while we Leavers continue to be fractured, splintered, not campaigning, not pressurising MPs.

"The best way to protect our great victory is to be prepared if they come at us again."

He said he had tried but failed in recent months to persuade Leave figures to come together.

"I'm hoping now that by saying I fear a second referendum may be coming we might just get some Leavers together.

"We need to keep fighting for that victory."

Stressing that pro-Remain groups were already campaigning round the country, Mr Farage added: "What if they're organised and we're not?