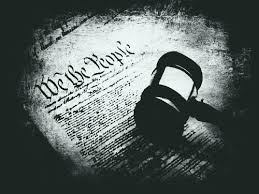 A great many people – especially conservatives – reverence the Constitution, consider that it has been abused and that if only the doctrines expressed within were revived and respected, all would be well with America again.

This, of course, is a kind of children's bedtime story – and approximates reality to about the same degree as the story of the Three Little Pigs.

The Constitution was peddled and imposed on us by men like Alexander Hamilton, a grasper after power who very openly loathed the ideas expressed by men like Jefferson in his Declaration (and even more so in his Virginia and Kentucky Resolutions).

Hamilton and his faction – they were called Federalists, which meant then what it means today – intended to create a centralized government on the British model, but without a hereditary monarch. The Bill of Rights was just barely added, in order to sooth the (rightly, as it turned out ) suspicious, such as George Mason of Virginia.

At any rate, the fact remains that the Constitution was written with great calculation by lawyers – who are trained in and well understand the meaning and potential use of words – in such as way as to assure the expansion of federal power via (among other things) the purposely open-ended Commerce Clause and deliberately nebulous phrases such as "general welfare" that can be – and have been – interpreted to mean . . . anything those who control the levers of the federal government wish it to mean.

Including – as actually happened during the Roosevelt Years – that a man farming on his own land whose produce never leaves his land let alone the state is nonetheless subject to federal regulation, because his actions "affect" Interstate Commerce.

In the same manner, Americans are forced to pay for other people's retirement (and in their turn, forcing others to pay for theirs) and this is characterized as a "contribution."

Regardless – the debate ought not to be over a piece of paper and what it does or does not legalize. A thing can be morally vile and entirely legal. The debate ought to be over the question of rights vs. conditional privileges. And whether the immoral can ever – rightfully – be lawful.