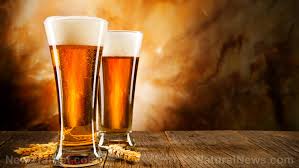 (Natural News) Beer could soon replace diesel and gasoline as a promising source of sustainable motor fuel by 2022, thanks to chemists who developed a method for converting the alcoholic beverage into a new type of fuel without the need to alter the vehicles.

Scientists from the University of Bristol have managed to create fuel from beer by converting its active ingredient, ethanol, into butanol through petrochemical processes similar to how gasoline is refined.

According to Professor Duncan Wass, lead author of the study (published in the journal Catalysis Science and Technology): "One of the great benefits of using butanol as a fuel is that it can be used with current petrol cars with no or very little modification. This is a drop-in replacement for current petrol.

"Ethanol would be converted to butanol in a large plant very much like the current petrochemical/refining industry, and then butanol would be put in the car by the consumer."

Bioethanol is already a widely-used alternative to gasoline worldwide. However, ethanol cannot entirely replace gas as it is corrosive to engines. Also, ethanol is extremely water-soluble and possesses a lower energy density than gasoline.

Scientists can convert ethanol to butanol in laboratory conditions with pure, dry ethanol using a catalyst, a substance used to speed up the chemical reaction.

The process is currently capable of producing a few hundred grams of butanol from beer, but it can't be used on an industrial scale. As Professor Wass points out, the substance created by the technology they developed is "not enough to fill a car's tank just yet!"

However, experts predict that cars could be running on this type of fuel in five years' time if the process goes smoothly, potentially ending our reliance on gasoline. For now, it is still "very much at the laboratory scale." (Related: How Ethanol Fireplaces Burn Alternative Fuel.)