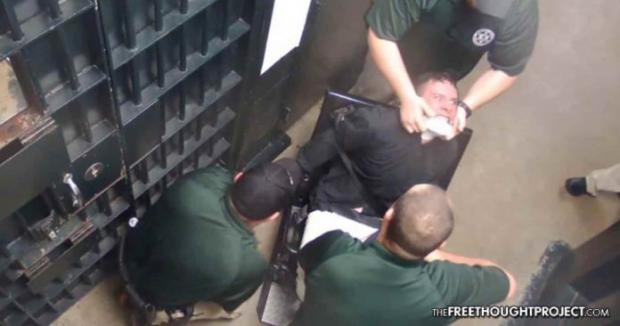 Video footage of police officers using a taser commit torture has gotten the attention of the United Nations who is now launching an investigation.

The horrific behavior of the American police state has become so overt that it has garnered international attention. The United Nations is now calling for an investigation into multiple departments for the use of excessive force via tasers which they are finally referring to as "torture."

The Free Thought Project has reported on countless incidents in which police officers in America have been captured on video torturing individuals—many of them restrained in handcuffs or chairs—with tasers. While we have long been referring to this practice as "torture," the media at large has refused to do so which has allowed it to progress to its current horrifying state. However, it now appears that this is all changing.

Thanks to a recent report out of Reuters, which included footage of 22 incidents in four jails—Franklin County, Ohio; Franklin County, Arkansas; McCurtain County, Oklahoma; and Cheatham County, Tennessee—the U.N. special rapporteur on torture has finally acknowledged the abuse.

According to Reuters, after reviewing footage of jail incidents obtained by Reuters, Nils Melzer said the "grave abuse" from Taser use in some U.S. jails violated the United Nations' prohibition on cruel, inhuman or degrading punishment and, in some cases, amounted to torture.

The videos of these incidents are so disturbing that they can no longer be swept under the rug.

"I think it's good that we've got international oversight of this issue," Attorney Ben Raybin said of the U.N. citation. "I think excessive force in our jails and prisons is a significant issue that often goes overlooked.