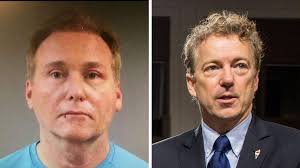 BOWLING GREEN, Ky. — Rand Paul was on the verge of becoming a powerful senator and the nation's leading libertarian. His neighbor was a successful doctor and Kennedy-style Democrat who favored nationalized medicine.

They might have sparred over health care or taxes, but an acquaintance of both said they stood in their yards roughly a decade ago shouting at each other over the grass clippings Paul's mower had shot on Rene Boucher's property.

" 'I ask him, I tell him and he won't pay attention,' " the acquaintance, Bill Goodwin, recalls Boucher saying after the argument. " 'One of these days.' "

That day may have come last month, when Boucher's attorney said in an interview his client attacked Paul over long-simmering disagreements between the two about the care of grass, trees and other landscaping on their adjacent properties in an exclusive gated community.

The account marks the first time either side has offered a reason for one of the nation's most talked-about political mysteries: What sparked the worst attack on a sitting senator in decades?