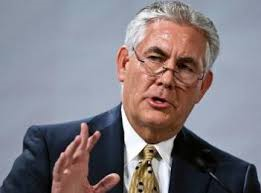 "The United States has decided to end participation in the UN process to develop a Global Compact on Migration (GCM)," Tillerson said in a statement.

The U.S. has participated in the New York Declaration for Refugees and Migrants, a 2016 agreement to manage international migration, which was in the process of being adopted as a global compact in 2018.

Tillerson, however, said that the compact, which aims to protect the rights of migrants as well as help them resettle, "contains a number of policy goals that are inconsistent with U.S. law and policy."

"While we will continue to engage on a number of fronts at the United Nations, in this case, we simply cannot in good faith support a process that could undermine the sovereign right of the United States to enforce our immigration laws and secure our borders," he continued.