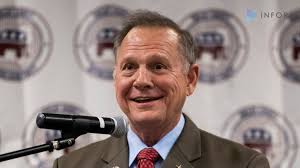 Why would Christian conservatives in good conscience go to the polls Dec. 12 and vote for Judge Roy Moore, despite the charges of sexual misconduct with teenagers leveled against him?

Answer: That Alabama Senate race could determine whether Roe v. Wade is overturned. The lives of millions of unborn may be the stakes.

Republicans now hold 52 Senate seats. If Democrats pick up the Alabama seat, they need only two more to recapture the Senate, and with it the power to kill any conservative court nominee, as they killed Robert Bork.

Today, the GOP, holding Congress and the White House, has a narrow path to capture the Third Branch, the Supreme Court, and to dominate the federal courts for a decade. For this historic opportunity, the party can thank two senators, one retired, the other still sitting.

In 2013, Harry exercised the "nuclear option," abolishing the filibuster for President Obama's judicial nominees. The Senate no longer needed 60 votes to confirm judges. Fifty-one Senate votes could cut off debate, and confirm.