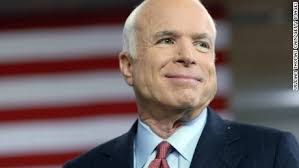 John McCain says Hillary Clinton should just get over it.

Comparing his post-2008 doldrums with Clinton's current struggle to understand how she lost to Donald Trump, the Arizona senator tells Esquire that unlike Clinton, he resisted the instinct to play Monday morning quarterback after Barack Obama beat him.

The failed Democratic presidential nominee quickly began promoting a memoir called 'What Happened' after the 2016 election, blaming dozens of people and factors for her defeat, but never herself.

'You've got to understand that you can't rewrite history,' McCain said in an interview published Monday.

'One of the almost irresistible impulses you have when you lose is to somehow justify why you lost and how you were mistreated: "I did the right thing! I did!" The hardest thing to do is to just shut up.'

McCain had the Senate to fall back on when his presidential aspirations went belly-up.

Hillary had only a series of sympathetic TV interviews and her book tour.

McCain suggested she got back on the horse too quickly.

'History will judge that campaign, and it's always a period of time before they do. You've got to move on.'

'This is Hillary's problem right now: She doesn't have anything to do,' McCain said.