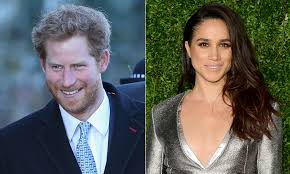 MEGHAN Markle showed off her sparkling engagement ring as her fiancé Prince Harry revealed he knew she was The One "the very first moment I met her".

The smitten royal is set to wed the American actress in spring next year after secretly popping the question in London earlier this month.

The Suits star stroked Harry's arm and walked hand in hand as they made their first appearance in public since the announcement of their engagement.

Standing The Sunken Garden at Kensington Palace, the happy couple beamed in front of the world's press gathered outside

The American actress will live with Prince Harry in Nottingham Cottage at Kensington Palace once they are wed next year.

A palace spokesman today said: "His Royal Highness The Prince of Wales is delighted to announce the engagement of Prince Harry to Ms Meghan Markle.

"The wedding will take place in Spring 2018.

"Further details about the wedding day will be announced in due course."