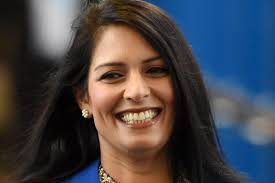 Patel's off-the-books meetings with 12 Israelis, including prime minister Benjamin Netanyahu, were organized by a British lobbyist in violation of government rules requiring careful documentation of official meetings. That is to prevent conflicts of interest and illicit lobbying by foreign powers.

Government protocol was flouted again when Patel headed to the Golan Heights, occupied Syrian territory, escorted by the Israeli army. There she was shown an Israeli military field hospital that patches up Syrians, including Al Qaeda-affiliated fighters, wounded in Syria's civil war.

Afterwards, Patel pressed for the Israeli army, one of the most powerful in the world, to receive a chunk of Britain's overseas aid. Meanwhile, she has sought to cut aid to the Palestinians, including to vital projects in Gaza. A clue as to how she reached such absurd "humanitarian" priorities is provided in the figure of Stuart Polak, mentor on her Israel "holiday".