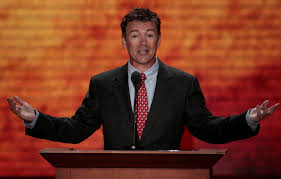 Rene Boucher, 59, told neighbor Rand Paul that he hadn't been able to sell his house for ten years because of the woodland behind Paul's property

The trees apparently block Boucher's views of the picturesque private lake that forms the centerpiece of their upscale gated community in Bowling Green, KY

DailyMail.com can reveal the two men's lots houses are about 250ft apart, separated by a lawn rather than a wall or fence

'Rand mowed his own yard. It was always presentable. That's a very lame excuse if that's the one they are choosing to use,' neighbor Dan Renshaw, 70, said