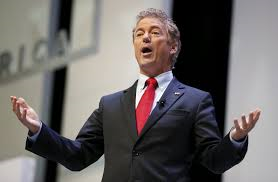 Struggling to breathe and talk, the result of six ribs being broken in the incident, Paul told Secrets that he knew of no motive that would have sparked his neighbor to hit him from behind.

"From my perspective, I'm not really too concerned about what someone's motive is. I'm just concerned that I was attacked from the back and somebody broke six of my ribs and gave me a damaged lung where at least for now I have trouble speaking and breathing and now I've hurt for 10 days," the senator said after arriving back in Washington for a week of critical votes.

Paul, a former Republican presidential candidate, was doing yard work on Nov. 3 when he was blindsided by the attack allegedly by Rene Boucher, his neighbor. Boucher was charged with fourth-degree assault and released on Saturday on $7,500 bond.

Paul, 54, suffered six broken ribs, cuts on his face, and has fluid buildup in his chest. Recovery could take months and the pain is great, he said.