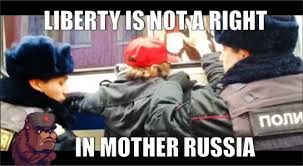 Last weekend, the Libertarian Party of Russia was co-organising the Adam Smith Forum, an annual conference on classical liberalism, in Moscow. The topics discussed included railway nationalisation, universal basic income, smart contracts and many more — by no means anyone called for an armed anti-government riot. However, when a group of guests and speakers were going on a lunch break they were brutally searched, arrested and taken to the police station.

Once again: in 2017, in the centre of Moscow, police arrest the participants of an academic conference!

Some of the detainees were not released until late at night, others are still kept under arrest; some were accused of participating in an unauthorised rally and are now serving 15 days in jail. Most importantly, all of them are now questioned as witnesses as part of the the ongoing investigation of preparing mass riots and terrorism. Right now, when I'm writing this post, the underaged — there were few of them among the detainees — are questioned for the second time in a row. In that very moment the investigators might be forcing the 17-year-olds to testify against their elder fellows who were accompanying them.