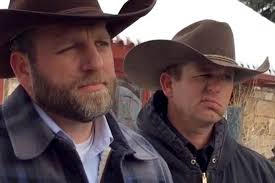 More than three and a half years since the incident in question, jury selection began Monday in Las Vegas for the trial of Nevada rancher Cliven Bundy, his two sons, and a fourth defendant for their role in the Battle of Bunkerville.

Chief U.S. District Judge Gloria Navarro told nearly 50 potential jurors Monday that the trial could take as long as four months, according to the Associated Press. Jury selection is expected to last through Thursday.

Bundy, his sons Ryan and Ammon, and Montana native Ryan Payne all face a slew of charges in connection with the nearly weeklong armed standoff that happened about 80 miles northeast of Las Vegas in April 2014. Bureau of Land Management agents came knocking after Bundy refused to pay federal grazing fees for his cattle over the course of two decades. BLM agents showed up to round up the cattle in lieu of the $1 million in backed fees.

But Bundy and his sons were flanked by dozens of protestors, many of them armed. The agents eventually retreated, and no shots were fired. Still, 19 people have been arrested in connection with the standoff. Some have pleaded guilty, others have been found guilty in other trials, and others still have been exonerated or taken plea deals with what are expected to be light sentences. The trial of Bundy and his sons is the third trial of the year.

"Although they are accused, they start trial with a clean slate," Navarro said of the four defendants on Monday.