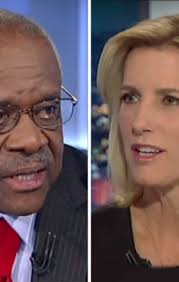 The opportunity to play a vital role on the Supreme Court, 26 years after a brutal and partisan confirmation process, was ultimately worth the fight, Justice Clarence Thomas told Laura Ingraham Wednesday night on Fox News.

And veterans served a key part in forming his belief that the fight in 1991 was worth it, Thomas said on "The Ingraham Angle."

Ingraham asked Thomas about what he said in the fall of 1991, when Democrats brought a witness, Anita Hill, before the Senate Judiciary Committee to accuse him of sexual harassment. Ingraham played the footage.

Yet Thomas won confirmation, and as a conservative, helped shape law for America. Thomas told Ingraham the struggle of veterans help him see it was indeed worth it.

"I think we are called to do certain things," said Thomas. "When we do Wounded Warriors events or ... Wreaths Across America, what do you tell the widows, the families of the fallen? That you were too afraid to go through a little bit of uncertainty, a little bit of difficulty, to do a job like this? When they actually were in harm's way? What do you tell the young man who is a double amputee, because of war? That you were afraid to go through that? I don't think anyone would choose to go through unpleasantness, but if it has to be that, to do what is right, then so be it."