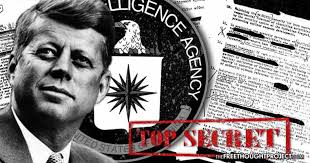 On Thursday, much to the chagrin of anyone seeking transparency, the US government released 2,800 previously classified files relating to the assassination of John F Kennedy while holding back several hundred more. President Donald Trump delayed the release of the others, saying he had "no choice" but to consider "national security, law enforcement, and foreign affairs concerns" raised mostly by the FBI and CIA. As TFTP predicted, the JFK files were no smoking gun. However, many of the documents contained in them reveal and confirm the absolutely horrifying practices of the world's most insidious spying agency.

In an amazing act of citizen journalism, Thursday night, the internet pored over the documents, including all of our staff here at TFTP. The information gleaned from these previously Top Secret documents reveals the dark truth about the CIA's covert, murderous, criminal, and outright terroristic workings.

From mind control to media control to working with the mafia and using covert chemical weapons to starve innocent civilians, the CIA has operated in the shadows breaking international law and laying waste to anyone who gets in their way.