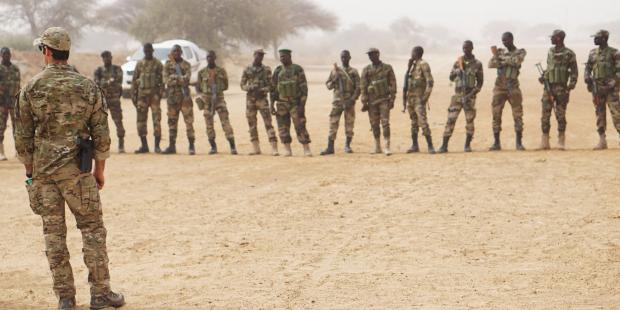 THE MISSION NEVER made the front page of the New York Times or the Washington Post. It wasn't covered on CNN or Fox News. Neither the White House chief of staff, the chair of the Joint Chiefs of Staff, nor the president ever addressed it in a press briefing. But from mid-January to late March 2013, Green Berets from the 10th Special Forces Group deployed to the impoverished West African nation of Niger. Working alongside local forces, they trained in desert mobility, the use of heavy weapons, and methods of deliberate attack.

On May 15 of that year, another contingent of Special Forces soldiers arrived in Niger. For nearly two months, they also trained with local troops, focusing on similar combat skills with an emphasis on missions in remote areas. From the beginning of August until mid-September, yet another group of Green Berets traveled to the hot, arid country for training, concentrating on desert operations, heavy weapons employment, intelligence analysis, and other martial matters, according to Pentagon documents obtained by The Intercept via the Freedom of Information Act.

One constant of all of these counterterrorism missions, which were carried out by small teams of elite U.S. troops operating alongside Nigerien forces, was a concentration on reconnaissance. Until recently, such missions were conducted without notice or media scrutiny. Americans were involved in firefights, but the operations were kept quiet. When special operators died in Africa, it was due to an accident or after a night of partying. Americans were rarely killed in combat.