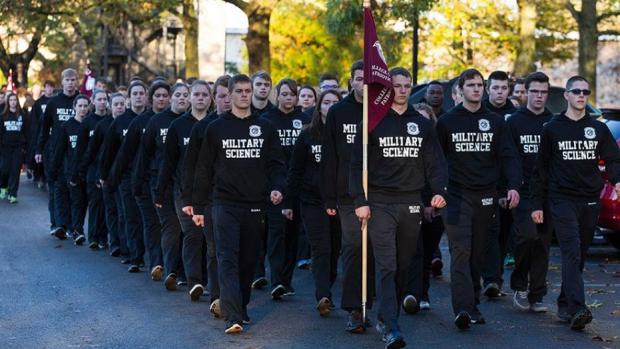 A private Christian school in Missouri is sending a clear message to freshmen: respect the military and everything it stands for.

New students at College of the Ozarks are now being required to take the school's Patriotic Education and Fitness class, which covers military customs, American flag protocol, map reading and marksmanship, among other subjects, its president told Fox News.

"There is too much of an indifference toward the military in this country, and people seem to have forgotten that people in the military are the ones that continue to make the sacrifices for the rest of us," Jerry Davis said.

Davis said the course is unusual for a non-military institution, but it "helps support the college's patriotic goal" and would count toward ROTC fulfillments if interested students wanted to pursue that program.

"We think in the culture there is a problem in the division between the 1 percent who serve in uniform and the 99 percent living the good life because someone else made a sacrifice in a military uniform," Davis added. "Colleges should be more intentional about teaching young people about the military and such things as leadership and cooperation and teamwork, things the military does very well."

Davis said he hopes other schools follow suit and that students have reacted positively so far to the curriculum. Around 1,500 students attend the school.

Talan Saylor, an 18-year-old freshman from Illinois, told the Springfield News-Leader the course helps build camaraderie and that he plans to serve in the U.S. Army.