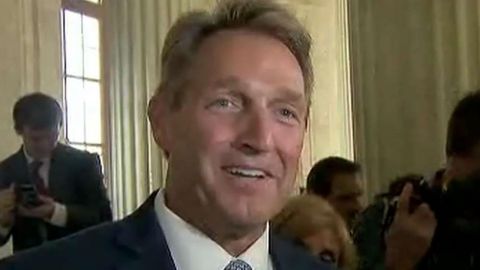 On the morning that Donald Trump tried to bring his party's senators together at a White House lunch, a war of words erupted between the president and the Republican chairman of the Foreign Relations Committee.

And by the afternoon, Arizona Republican Jeff Flake blistered Trump from the Senate floor in announcing that he, like Bob Corker, won't run again.

Flake, who faced a tough reelection battle, ratcheted up his rhetoric, saying that "reckless, outrageous and undignified behavior has been excused and countenanced as telling it like it is." He said there was a "flagrant disregard for decency" that came "from the top of our government," and this was "dangerous to a democracy…I will not be complicit or silent."

If you take a step back, this is truly extraordinary: Two prominent Republican senators, Flake and Bob Corker, using incendiary language against a president of their own party and deciding to forfeit their jobs. Trump had already dismissed Jeff Flake as, well, a flake.

John McCain praised his fellow Arizonan. But the Steve Bannon wing of the GOP will undoubtedly be pleased at getting rid of two Trump critics and trying to replace them with more reliable lawmakers. But the 2018 departures also provide an opening for the Democrats.

On a day that was supposed to be devoted to tax reform, Corker hit Trump with so many jabs—on television, on Twitter, on the Hill—that I started losing track. And Trump repeatedly punched back.

I know, I know. We've already been through a couple of rounds of the great Trump-Corker slugfest, with warnings of World War III and all that. But this has risen to a whole new level.

The Corker feud isn't hard to grasp: These guys don't like each other, and the Tennessee senator isn't running for reelection. He made the morning TV rounds.

Corker on "Today": The White House should "step aside" on tax reform.

Corker on "CBS This Morning": "It appears to be the governing model of this White House to purposefully divide."

Corker on CNN: "I don't know why he lowers himself to such a low, low standard and is debasing our country."