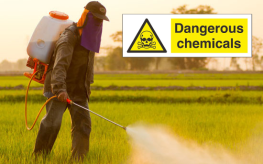 The "active" ingredient of Roundup herbicide is a carcinogen called glyphosate. This chemical has been extensively studied by international research teams that make up the International Agency for Research on Cancer (IARC), a division of the World Health Organization (WHO). After a yearlong study, IARC concluded in 2015 that glyphosate is "probably carcinogenic to humans." But the toxicity doesn't end there.

While glyphosate by itself is carcinogenic to humans and destructive to microbe ecology, the parts that don't get studied are the "inert" ingredients and how their synergy makes glypohate even more devastating to human health. What role do "inert" ingredients play in disrupting human endocrine systems, cellular processes, and assisting the permeation of toxins across the blood-brain barrier?

"Inert" ingredients are designed to enhance glypohsate's toxicity as an herbicide. Since glyphosate is also a registered antibiotic, it is inevitably doing great damage to human gut health. Becoming part of the food and water supply, glyphosate and its host of inert ingredients work together and deplete the good bacteria that control much of the human digestive and immune systems.

The inert ingredients of Roundup that often go ignored, are actually powerful adjuvants that make glyphosate more pervasive in the environment, delaying the breakdown and decay of glyphosate, while allowing the carcinogen to more readily penetrate tissues. These "inert" ingredients are making glyphosate more of a nightmare long term. It's the synergistic chemistry that should trouble consumers the most. Consequentially, we are now being exposed to glyphosate in organic products. Human breast milk passes these toxins on to infants. The U.S. regulatory agencies are not monitoring and testing products for glyphosate toxicity or heavy metal accumulation.

Caroline Cox of the Center for Environmental Health and Michael Surgan of the Office of the Attorney General of New York State took it upon themselves to study the synergy of glyphosate and the inert ingredients in Roundup. Their paper, published in the journal Environmental Health Perspectives, found that the entire pesticide formulation induced toxic effects greater than the herbicide's lone active ingredient. Most concerning is the damage the whole product causes to the genetic information of cells. While glypohsate alone causes cancer, the inert ingredients allow glyphosate to penetrate further, damaging chromosomes and causing DNA mutations. In another study, Roundup as a complete formulation was much more lethal to human placenta cells than glyphosate alone. The formulation inhibited the activity of the enzyme aromatase, which plays an important role in the human endocrine system.