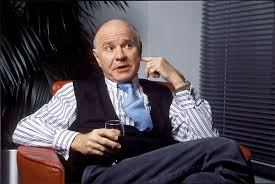 "The recent comments by Dr. Faber are deeply disappointing and are completely contradictory with the views of Sprott and its employees," said Peter Grosskopf, CEO of Sprott. "We pride ourselves on being a diverse organization and comments and behavior of this sort will neither be condoned nor tolerated. We are committed to providing an inclusive workplace for all of our employees and we extend the same respect to our clients and investors."

Separately, both CNBC and Fox Business Network, cable channels where he had appeared in the past, said they won't invite him on in the future.

Marc "Dr. Doom" Faber is in trouble, only this time it's not for yet another doomsday forecast which hasn't come true, but for launching into a racially charged diatribe telling subscribers to his newsletter that he was glad that "white people populated America, and not the blacks."

The eccentric veteran investor and former Drexel director, who predicted the 1987 stock market crash and has been a fixture on financial television, claimed in his October 3 monthly newsletter that "the U.S. would look like Zimbabwe" if the country had been settled by black people instead of whites.