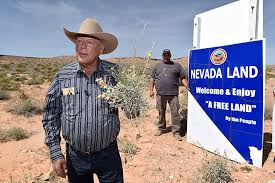 A federal judge has postponed a trial for six men on charges in the Bunkerville standoff as Southern Nevadans, including potential jurors and lawyers in the case, grapple with emotions following Sunday's massacre on the Strip.

The trial for Gold Butte rancher Cliven Bundy, two of his sons and three other men was initially slated to start Tuesday. But U.S. District Judge Gloria Navarro rescheduled it until Oct. 30, saying it would be difficult to find jurors who could "concentrate and focus on this case."

Despite objections from jailed defendants Cliven Bundy and his son Ammon Bundy, lawyers on both sides of the case agreed that a delay would be necessary, at least in part to give potential jurors a chance to recover from the tragedy.

Prosecutors have alleged Cliven Bundy conspired to thwart the federal government's roundup of roughly 1,000 cows from public land. It will be the third trial in the case.

Men were poised with assault rifles less than 200 yards from Bureau of Land Management agents during the Bunkerville standoff.

Two defendants who were acquitted earlier this year on most counts are still slated to face a third jury on charges that include assault and threatening federal officers.

Cliven Bundy's attorney, Bret Whipple, told the judge that one of his associates was at the festival and would need personal time. The rancher, jailed for more than a year and a half, initially opposed postponing the trial, but Whipple told the judge Bundy was neutral on the issue.

Lawyers for Ammon Bundy asked to move the trial to Reno, but Navarro pointed out that Paddock owned a home there and that Northern Nevada residents also held vigils for shooting victims.

"It's not affecting them any less than it's affecting us," the judge said.

"At what point does this ameliorate where it's not going to be on someone's mind?" Myhre asked the judge. "These events are unrelated. We oppose a lengthy continuance."

Earlier Friday, Pete Santilli, a seventh defendant in the case, pleaded guilty to one count of conspiracy to impede or injure a federal officer, a felony, and was released pending a January sentencing.