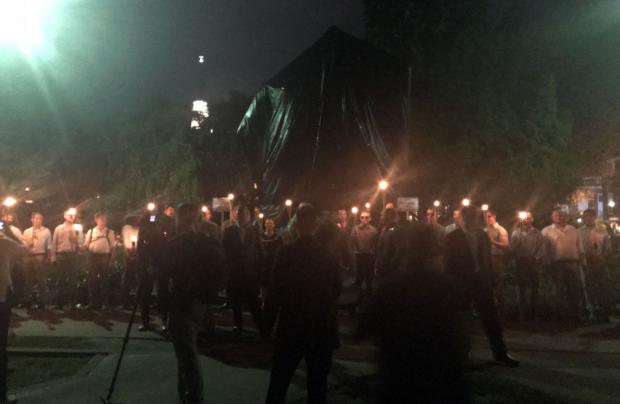 Spencer, Unite the Right rally organizer Jason Kessler and members of white supremacist and neo-Nazi groups first gathered at the Lee statue on May 13. On Aug. 11, the day before a violent rally ended in the deaths of three people and numerous injuries, a torchlit march across University of Virginia Grounds concluded at the Rotunda. Spencer and Kessler are both graduates of UVa, which celebrated its bicentennial on Friday.

At about 7:40p.m. Saturday, about 40 to 50 ralliers chanted "we will be back," according to Daily Progress media partner NBC29. While Spencer led the rally, which lasted about five to 10 minutes, according to police, it was unknown if Kessler was participating.

Charlottesville police observed no disorders at the rally, and officers followed Spencer and his supporters as they left Emancipation Park in a tour bus to ensure that they were leaving the city.

On Twitter, Spencer called the rally "Charlottesville 3.0" and deemed it a "great success" that should be repeated by supporters.

An NBC29 reporter noted that police maintained a presence in and around the park but did not intervene. Demonstrations involving 50 or fewer people do not need a permit in Charlottesville, and the park is open to the public until 11 p.m.