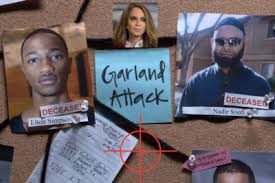 If the plaintiff, Bruce Joiner, doesn't settle with the bureau, the case could shake loose hundreds of documents from both local and federal officials about what happened that day, and could answer the question of why an FBI agent was in a car directly behind the attackers and did nothing as the events unfolded.

In May of 2015, Elton Simpson and Nadir Soofi drove from their home in Phoenix to the Curtis Culwell center in Garland where the "Draw Muhammad" contest was being held, in a car loaded with three rifles, three handguns, and about 1,500 rounds of ammunition.

The two never made it inside, as guards, including Joiner, stopped them outside at a perimeter checkpoint, at which time Simpson and Soofi opened fire. Because the event was heavily guarded, the two were quickly shot and killed and barely made past the checkpoint where they opened fire.

Joiner was the only victim that day. He took a bullet to the left leg, and ISIS would later claim credit for orchestrating the attack, making it the first ISIS-backed terror event on U.S. soil.