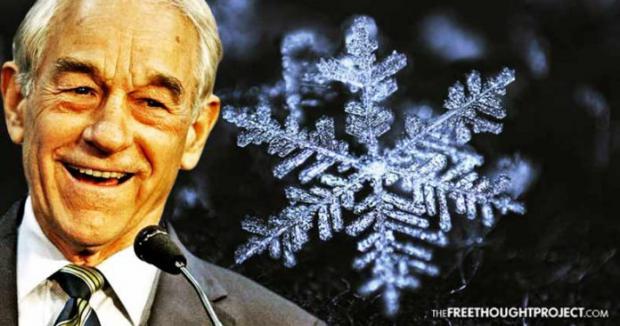 The modern-day political climate is pushed to the extreme by people who claim other people 'offend' them. There are snowflakes on the left and right.

There is a dangerous precedent being set in America right now, and it all stems from the act of being offended and the actions one takes to prevent future 'offenses.' It is important to note that the freedom of speech is under attack and it is a bipartisan effort. Many of those complicit in the quelling of free speech are merely useful idiots and have no idea they are participating in one of the most effective forms of censorship humanity has ever seen. As terms like 'snowflakes' get thrown around to label those who get easily offended, ironically enough, those on either side of the offending party have no idea that they may be becoming what they are ridiculing.

As Ron Paul recently pointed out, both sides of the two-party paradigm are becoming easily triggered by the other side and this has given rise to the snowflake on the right.

The "snowflake" moniker is often used to refer to people who are easily offended by just about everything. Unable to accept or acknowledge free will, these "snowflakes" attempt to use bully tactics and even government legislation to try to force people to think and act in a certain way.

It's more of an annoyance than anything else.Free will still reigns supreme. No amount of legislation can change that. We're all still naturally free to form our own opinions and act on them.

While the "snowflake" designation has usually been reserved for people on the left-side of the political spectrum, we may be seeing the emergence of "snowflakes" on the right as well.

Apparently, many people on the right are offended by athletes (or anyone else) not standing up in front of the American flag while the national anthem is playing. Unable to acknowledge free will, they attempt to use bully tactics to try to force people to act a certain way.

PIERS MORGAN: The woke destruction of a great educator should terrify every one of us...

'Institutions are under siege from maniacs':

The Great RESET Is Happening, People Own Nothing And Liberals Are Happy About It