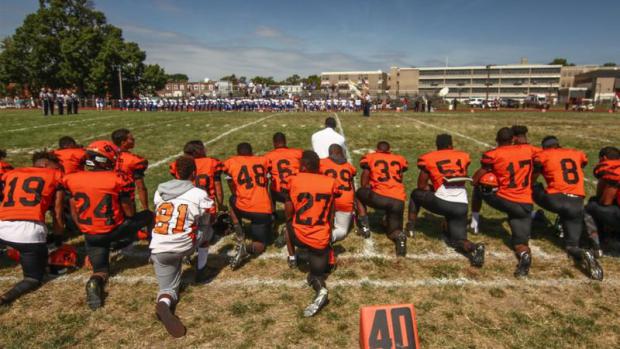 In their decision, the Bossier Parish School Board cited "respect and reverence" for the military, a spokesperson told the BBC.

A number of National Football League (NFL) players have protested after being attacked by the US president.

In Louisiana, the head of Parkway High School wrote a letter on Thursday morning to parents and students vowing to suspend or remove from sports teams anyone who demonstrates while the national anthem is played.

The decision was made "in light of the national conversation currently taking place", a spokesperson for the school district said in a letter to the BBC.

In Baton Rouge, the Louisiana capital, one school has decided to cancel the national anthem "amid safety concerns", an official said.

The American Civil Liberties Union of Louisiana vowed to sue the Bossier Parish school district if any students face punishment for protests.