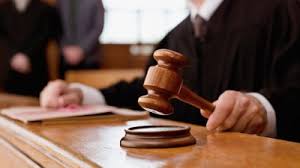 The owner of a New Hampshire mortgage company who used electronic billboards to accuse three businessmen of crimes is liable for $274.5 million in damages in a defamation lawsuit against him, a jury found Friday.

The plaintiffs' lawyer said he believes the jury award is the largest in the state's history. In 2013, a jury found Exxon Mobil must pay $236 million to help clean groundwater contaminated with a gasoline additive known as MTBE.

Michael Gill, head of The Mortgage Specialists, has targeted other businessmen, politicians, lawyers, and judges in his electronic signs through the years.

He put up images of an auto dealer CEO, a banker and a developer, accompanied by the words "drug dealer" and "extortion," on a large billboard outside his Manchester office off a busy highway. He also made similar references to them online and on radio and television.

The businessmen had donated money to the development of a nonprofit drug and alcohol recovery treatment center. They sued Gill, saying he falsely accused them of crimes and demonstrated "ill will, evil motive, intent to injure and wanton disregard" for their rights.