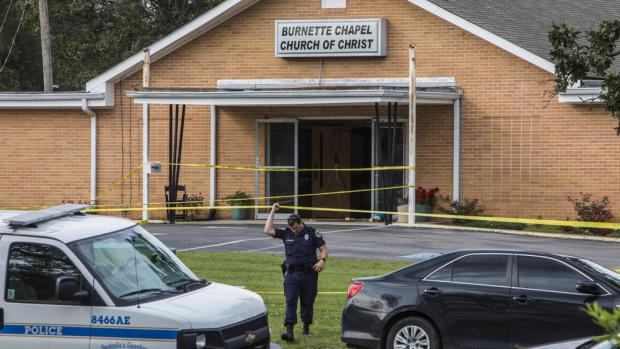 The shooting took place about 11:15 a.m. as morning services drew to a close at the Burnette Chapel Church of Christ in Antioch, about 12 miles southeast of downtown Nashville, police spokesman Don Aaron said at a news conference.

Police identified the suspect as Emanuel Kidega Samson, 25, a native of Sudan who congregants said had attended the church a year or two ago. He was taken into police custody Sunday afternoon after being treated at Vanderbilt University Medical Center. Authorities, who are still investigating potential motives for the shooting, said they will charge Samson with murder and attempted murder.

After fatally shooting Melanie Smith, 39, a churchgoer who was walking to her vehicle, the gunman entered the rear of the brick church and shot three men and three women, police said.

The shooting came to an end after a 22-year-old church usher, Robert Caleb Engle, physically confronted the gunman, who shot himself, possibly by accident, during their struggle.