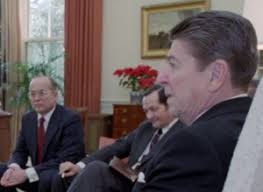 The documents from 1982 came at a turning-point moment when the Reagan administration was revamping how the U.S. government endeavored to manipulate the internal affairs of governments around the world in the wake of scandals in the 1960s and 1970s involving the Central Intelligence Agency's global covert operations.

Instead of continuing to rely heavily on the CIA, President Reagan and his national security team began offloading many of those "political action" responsibilities to "non-governmental organizations" (NGOs) that operated in a more overt fashion and received funding from other U.S. government agencies.

But secrecy was still required for the involvement of these NGOs in the U.S. government's strategies to bend the political will of targeted countries. If the "political action" of these NGOs were known, many countries would object to their presence; thus, the "secret" classification of the 1982 White House memos that I recently obtained via a "mandatory declassification review" from the archivists at the Reagan presidential library in Simi Valley, California.

In intelligence circles, "political action" refers to a wide range of activities to influence the policies and behaviors of foreign nations, from slanting their media coverage, to organizing and training opposition activists, even to setting the stage for "regime change."

The newly declassified memos from the latter half of 1982 marked an ad hoc period of transition between the CIA scandals, which peaked in the 1970s, and the creation of more permanent institutions to carry out these semi-secretive functions, particularly the National Endowment for Democracy (NED), which was created in 1983.

Much of this effort was overseen by a senior CIA official, Walter Raymond Jr., who was moved to Reagan's National Security Council's staff where he managed a number of interagency task forces focused on "public diplomacy," "psychological operations," and "political action."

Raymond, who had held top jobs in the CIA's covert operations shop specializing in propaganda and disinformation, worked from the shadows inside Reagan's White House, too. Raymond was rarely photographed although his portfolio of responsibilities was expansive. He brought into his orbit emerging "stars," including Lt. Col. Oliver North (a central figure in the Iran-Contra scandal), State Department propagandist (and now a leading neocon) Robert Kagan, and NED President Carl Gershman (who still heads NED with its $100 million budget).

Despite his camera avoidance, Raymond appears to have grasped his true importance. In his NSC files, I found a doodle of an organizational chart that had Raymond at the top holding what looks like the crossed handles used by puppeteers to control the puppets below them. The drawing fit the reality of Raymond as the behind-the-curtains operative who controlled various high-powered inter-agency task forces.

Earlier declassified documents revealed that Raymond also was the conduit between CIA Director William J. Casey and these so-called "pro-democracy" programs that used sophisticated propaganda strategies to influence not only the thinking of foreign populations but the American people, too.

This history is relevant again now amid the hysteria over alleged Russian "meddling" in last year's U.S. presidential elections. If those allegations are true – and the U.S. government has still not presented any real proof  – the Russian motive would have been, in part, payback for Washington's long history of playing games with the internal politics of Russia and other countries all across the planet.

A Fight for Money

The newly released memos describe bureaucratic discussions about funding levels for The Asia Foundation (TAF), with the only sensitive topic, to justify the "secret" stamp, being the reference to the U.S. government's intent to exploit TAF's programs for "political action" operations inside Asian countries.

'A Day That Should Live In Infamy' - Peter Schiff: 50 Years Ago, Nixon Slams Shut The "

Why the NARA Secrecy Over the Secret JFK Records?

A Look Back At Nixon's Infamous Monetary Decision

'It's a total mess but more accurate than my election':