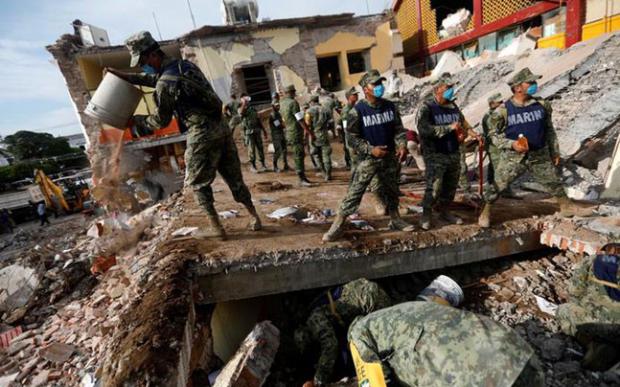 The magnitude-8.1 quake, which was felt as far as Mexico City and Guatemala City, was registered off Mexico's southern coast just as heavy rains from Hurricane Katia lashed the east. The epicenter was in the Pacific Ocean, some 600 miles (1,000 kilometers) southeast of the capital and 74 miles (120 kilometers) off the coast.

President Enrique Peña Nieto said the temblor -- felt by about 50 million people across the country -- was the strongest earthquake Mexico has experienced in 100 years. In September 1985, a magnitude-8.0 earthquake killed an estimated 9,500 people in and around Mexico City.

This one hit late Thursday, when many people were asleep. The states of Chiapas and Oaxaca, home to about 9 million people, are located closest to the earthquake's epicenter. They are two of the most impoverished areas in Mexico, and were likely hit the hardest.

At least 45 people were killed in Oaxaca state, Civil Protection National Coordinator Luis Felipe Puente said on Twitter. Ten others died in Chiapas state and three were killed in Tabasco, he said.