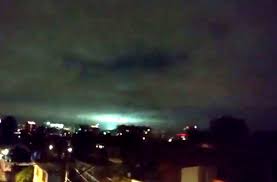 Mysterious green and blue flashes were seen by witnesses in Mexico City after it was rocked by a magnitude 8.2 earthquake.

The powerful quake set off a tsunami warning for at least eight countries – and at least six people have been confirmed dead in the most powerful quake to strike the country for 100 years.

A video of the earthquake lights was captured by a witness – capturing a strange, little-understood phenomenon.

Earthquake lights have been reported around the world for decades – with some claiming it's a natural phenomenon, and others claiming it's due to structural damage.

Reports of strange lights during earthquakes are common – sometimes even before the quake.

Some have suggested that the lights might be caused by electrical transformers or small explosions near the site of a quake.

A scientific paper in Seismological Research Letters suggested that charged atoms near the surface of the Earth may be behind the phenomenon – ionising pockets of air which form light-emitting plasma.

The paper suggested that the lights are sometimes seen weeks before an earthquake strikes.