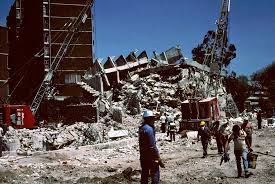 MEXICO CITY, Sept 7 (Reuters) - At least 32 people were killed after a massive 8.1 magnitude earthquake, one of the biggest recorded in Mexico, struck off the country's southern coast late on Thursday, causing cracks in buildings and triggering a small tsunami, authorities said.

The quake was apparently stronger than a devastating 1985 temblor that flattened swathes of Mexico City and killed thousands, but this time, damage to the city was limited.

A number of buildings suffered severe damage in parts of southern Mexico. Some of the worst initial reports came from the town of Juchitan in Oaxaca state, where sections of the town hall, a hotel, a bar and other buildings were reduced to rubble.

Alejandro Murat, the state governor, said 23 deaths were registered in Oaxaca, 17 of them in Juchitan.

A spokesman for emergency services said seven people were also confirmed dead in the neighboring state of Chiapas. Earlier, the governor of Tabasco, Arturo Nunez, said two children had died in his state.

The U.S. Geological Survey (USGS) said the 8.1 magnitude quake had its epicenter in the Pacific Ocean, 54 miles (87 km) southwest of the town of Pijijiapan in the impoverished southern state of Chiapas, at a depth of 43 miles.

Rescue workers labored through the night in badly affected areas to check for people trapped in collapsed buildings.

Windows were shattered at Mexico City airport and power went out in several neighborhoods of the capital, affecting more than one million people. The cornice of a hotel came down in the southern tourist city of Oaxaca, a witness said.

The tremor was felt as far away as neighboring Guatemala.

The quake triggered waves as high as 2.3 ft (0.7 m) in Mexico, the Pacific Tsunami Warning Center said. Mexican television showed images of the sea retreating about 50 meters, and authorities evacuated some coastal areas.

President Enrique Pena Nieto said the tsunami risk on the Chiapas coast was not major.

"We are alert," he told local television.

Several Earthquakes Shake Lake Tahoe – With A Big One Overdue, Is It Coming Soon?