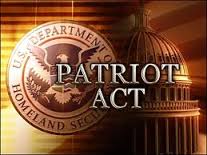 Whenever Congress does something unanimously (or nearly so) you can rest assured it's in their interests, not ours.

Another is the Safely Ensuring Lives Future Deployment and Research in Vehicle Evolution Act – aka the SELF DRIVE Act – which was rubber stamped through Congress the other day. This is the law that exempts automated cars from the safety requirements that apply to autonomous cars – that is, the cars which are independent of government control and controlled by us.

Just as the Patriot Act was written, not to "fight terrorism," but to make it easier for government to terrorize us, by circumventing or simply ignoring the Bill of Rights.

Same operating principle behind both.

There is irony – and malevolence – here.

Irony, because the same government that endlessly croons about "safety" – when it suits – is willing to back burner safety when it suits. If a car company dared to even suggest that it might be a good idea to install air bag Off switches in new cars (and it would be a very good idea, if safety is a concern, given how dangerous air bags are; not can be, but are) that company would be the focus of great abuse if not threatened prosecution.

Meanwhile, the SELF DRIVE Act will exempt automated cars from the necessity – under laws that apply to autonomous cars – of having things like steering wheels and brake pedals and other controls by which a human might intervene to save himself in the event the automated car makes a mistake.

It is presumed automated cars will never make a mistake, that their systems and technology are immune to defects, wear and tear and so forth.

And yet, it slid through Congress like shit through a goose.

It's worth noting that no one is suggesting commercial airliners – which already have the ability to fly themselves, including take-off and landing – do so without human pilots standing by to step in just in case. Much less have cockpit controls removed and the now ex-pilots told to go watch a movie back in Coach.

Why is it acceptable to do exactly that with machines that are more dangerous, en masse, than airliners simply by dint of numbers? There are only a few thousand airliners flying on any given day.

How many millions of cars are out there?

And the cars – the automated ones of The Future – will not be subject to the strict, FAA-style inspection and maintenance protocols that apply to airliners because it's simply not feasible (leaving aside the money) to have millions of cars brought into a facility for close examination of all their critical bits and pieces, preemptively replacing many of them according to a specific time/mileage schedule as a necessary precaution against the inevitably increasing risk of a failure based on wear and tear.

No one mentions this fact.

Nor the fact that without some way for a human driver to assume control of the automated car when an inevitable failure occurs, whether from wear and tear or a defect or some other reason, the human will be utterly powerless to do anything to save himself.