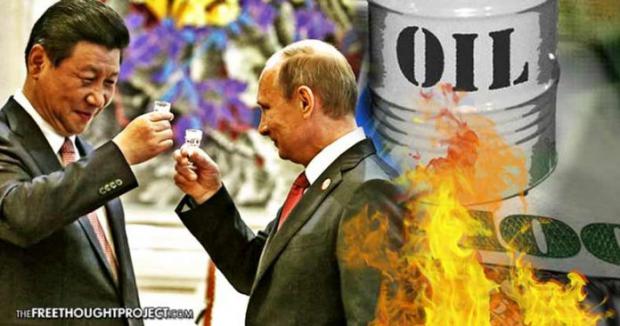 Beijing, China – In an effort to hedge against U.S. hegemony, and what could be a global game-changer, the world's top oil importer, China, is preparing to denominate crude oil futures contracts in Chinese yuan to be convertible into gold. The move would allow oil exporting countries to bypass benchmarks denominated in U.S. petrodollars — creating what will almost certainly be the most critical Asian oil benchmark, according to a report by Nikkei Asian Review.

Typically, crude oil is priced in relation to Brent or West Texas Intermediate futures, both denominated in U.S. dollars.

The move by the Chinese will allow oil exporting countries such as Iran and Russia to bypass U.S. sanctions by trading in yuan instead of U.S. dollars. The move is a direct result of the U.S. proclivity to use the dollar as a weapon against countries that refuse to bend to the imperial will of the United States. To make the yuan denominated contracts more appealing, China intends to make the yuan fully convertible to gold on the Shanghai and Hong Kong exchanges.

'Too risky to pursue': Wuhan lab 'bat woman' and US expert warned against performing