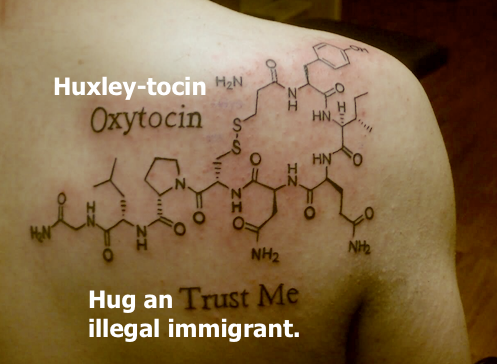 I really hope you understand this.

It is Brave New World, but not the Huxley novel. It's happening now.

It's a new published study that appears on the website of the prestigious Proceedings of the National Academy of Sciences of the United States of America.

The title of the study is, "Oxytocin-enforced norm compliance reduces xenophobic outgroup rejection."

Xenophobia is defined as: "fear or hatred of foreigners, people from different cultures, or strangers." (Dictionary.com)

Oxytocin, the chemical used in this study, is described by Medical News Today: "Widely referred to as the love hormone, oxytocin has also been dubbed the hug hormone, cuddle chemical, moral molecule, and the bliss hormone due to its effects on behavior, including its role in love and in female reproductive biological functions in reproduction."

"Oxytocin is a hormone that is made in the brain, in the hypothalamus. It is transported to, and secreted by, the pituitary gland, which is located at the base of the brain."

"In chemistry, oxytocin is classed as a nonapeptide (a peptide containing nine amino acids), while its biological classification is as a neuropeptide. It acts both as a hormone and as a brain neurotransmitter."

The published study details a successful attempt at chemical mind control. The goal is making people more "happy and friendly" about mass migration, by changing their hormonal response toward migrants.