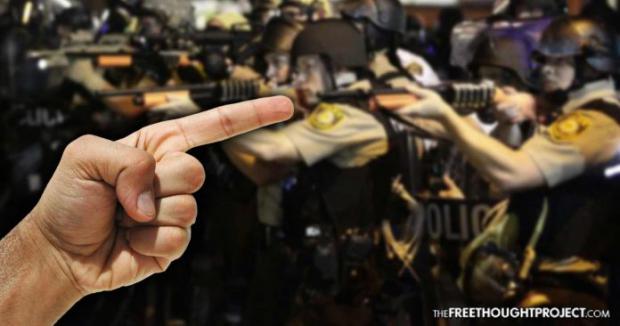 In Police State USA, the way you position your hand in a certain fashion around police officers can and will result in you being kidnapped and caged. According to a recent ruling by a Florida court if you point your finger at a cop and that cop thinks it looks like a gun, you can go to jail.

According to three Florida judges, forming one's hand into the semblance of a pistol and pointing it at an authority figure is not protected by the First Amendment, and is considered as 'threatening death or great bodily harm.'

"A judge has ruled that a Florida law used to arrest a man accused of threatening a Hialeah police officer is perfectly constitutional. The judge joined two others in Miami who have ruled that the misdemeanor law does not infringe on constitutionally protected free speech.

"'True threats' to injure persons are not protected by the First Amendment," Miami-Dade County Judge Maria Ortiz wrote in her order earlier this month."

The supposed "true threat" happened when Alex Romero pointed a finger gun at an off-duty police officer and said, "Officer Hernandez, I got you now!" The two apparently knew each other from previous run-ins, and Hernandez said the encounter made her fear for her life.

Perhaps Romero's status as an ex-con and a "305" tattoo on his eyelid made him appear to be a "bad dude" to Hernandez. It's more likely that Romero was joking around, albeit in poor taste. Even considering Romero's status and appearance, the fact that a completely harmless hand motion can be construed as a "true threat" in the eyes of the law is troubling.

"As almost everyone who was ever a child can testify, no one has ever been killed or injured by forming fingers into the shape of a gun and dropping the hammer [thumb]," Assistant Public Defender Paul Nuñez wrote in his motion to declare the law unconstitutional. "There is no objective true threat here from that gesture."

The Miami-Dade Public Defender's Office has been trying to challenge the "true threat" law in Florida since it was enacted in 2016. With this ruling, Florida courts have established a disturbingly broad definition of what authorities can consider a 'threat of death or great bodily harm.'