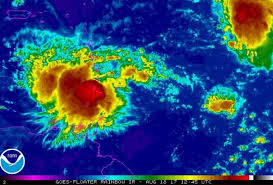 According to the latest warning from the National Hurricane Service (NHS), Harvey looks to be the first hurricane to strike the Texas coast since 2008.  According to NHS models, the storm is expected to gain hurricane-force winds by tomorrow afternoon and make landfall in Texas at 1AM on Saturday.  Of course, heavy flooding and storm surge warnings have been issued for most of the Texas coast.

Per Bloomberg, Harvey is expected to make landfall as a Category 1 or 2 hurricane.

"It could intensify right up to landfall on Friday," said Jeff Masters, co-founder of Weather Underground in Ann Arbor, Michigan. "I expect a Category 1 hurricane at landfall, but I cannot rule out a Category 2."

Harvey is expected to bring multiple hazards including heavy rainfall, storm surge and possible hurricane conditions to parts of the Texas coast on Friday. Heavy rainfall is expected to spread across portions of south, central and eastern Texas and the lower Mississippi Valley from Friday through early next week and could cause life-threatening flooding, according to the advisory.

Nearly the entire Texas coastline from Corpus Christi to Galveston are projected to be hit by hurricane force winds.

Meanwhile the rainfall forecast is calling for up to 20 inches of rain for those cities at the center of the storm.

In terms of economic impacts, nearly one-third of America's refining capacity currently sits in the path of the storm and large E&P companies have already started to evacuate staff from offshore rigs which will reduce oil imports to the Texas coast.

The Gulf Coast from Corpus Christi, Texas, to Lake Charles, Louisiana, is home to nearly 30 refineries -- making up about 7 million barrels a day of refining capacity, or one-third of the U.S. total. It's in the path of expected heavy rainfall. Flooding poses risks to operations and may cause power failures.

Several Earthquakes Shake Lake Tahoe – With A Big One Overdue, Is It Coming Soon?