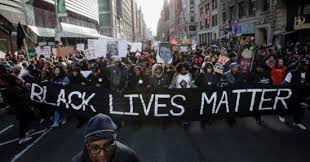 Black Lives Matter has a plan for you.

Actually, it's more of a plan for your stuff. And it involves giving it to them.

In a bizarre rant in a Louisville weekly paper, the local branch of Black Lives matter had a list of ten demands ("requests," as they put it) from white people.

Written by self-described "co-founder and core organizer of [BLM] Louisville Chanelle Helm, she opens her list of demands by telling white people that first: if they don't have any descendants, they need to give all their property to a black family. "Preferably one that lives in generational poverty," she writes.

And it just goes downhill from there.

Apparently, the cause of – and solution to – America's racial divide is for white people to give everything they own to black people. Who would have thunk it was so easy?

Here's another one. For white people who can "afford to downsize," they should "give up the home you own to a black or brown family."

And another: "White people, re-budget your monthly so you can donate to black funds for land purchasing."

But it's not all about money for BLM. No, they want you to rat out your friends, neighbors and co-workers for being racists. And they have such a pleasant way of making these demands:

White people, especially white women (because this is yaw specialty — Nosey Jenny and Meddling Kathy), get a racist fired. Yaw know what the fuck they be saying. You are complicit when you ignore them. Get your boss fired cause they racist too.

Following up on that request is the next one:

"This should be easy but all those sheetless Klan, Nazi's and Other lil' dick-white men will all be returning to work. Get they ass fired. Call the police even: they look suspicious."

And the next one – which seems to endorse violence:

"If any white person at your work, or as you enter in spaces and you overhear a white person praising the actions from [Charlottesville], first, get a pic. Get their name and more info. Hell, find out where they work — Get Them Fired. But certainly address them, and, if you need to, you got hands: use them.

These folks are pleased as punch too that people are talking about their idiotic list.

The Man Behind Critical Race Theory

"The Castration Of Whiteness": Duquesne Professor Under Fire After White Suicide Lecture

The Fightback Against Critical Race Theory

Phoenix: Teachers Who Refuse To Teach CRITICAL RACE THEORY Will Be Paid LESS Than Those Who Do