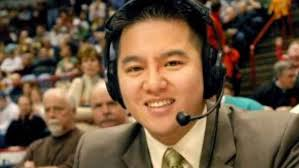 Is this even real life anymore?  So the fragile millennial culture now demands that you should be thrown in jail if you call them by the wrong pronoun but it's totally fine if their insecurities literally derail a person's career because they refuse to be 'assaulted' by the name his parents happened to give him?

Outkick the Coverage broke the story last night with this summary:

In a story that seems made for The Onion, but is actually true, according to multiple Outkick fans inside ESPN MSESPN decided to pull an Asian college football announcer named Robert Lee off the William and Mary at University of Virginia college football game because they were concerned that having an ASIAN FOOTBALL ANNOUNCER NAMED ROBERT LEE would be offensive to some viewers.

Did I mention that Robert Lee is Asian?

Is this even real life anymore? This might even be worse than MSESPN apologizing for the fantasy football slave draft a couple of weeks ago.

To avoid offending left wing idiots Robert Lee, the Asian college football announcer, not the Confederate General who died in 1870 and shares a name with him, was switched to the Youngstown State at Pittsburgh game and Dave Weekley will now call the William and Mary at University of Virginia game.