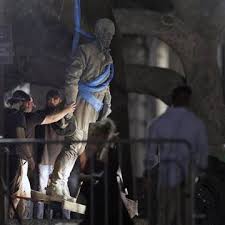 The university said the monuments -- which honor four figures tied to the Confederacy -- were erected during the period of segregation and "represent the subjugation of African Americans" and therefore should be taken down.

The news comes in the wake of a deadly outbreak of violence in Charlottesville, Virginia -- which began in protest of the planned removal of a monument of Confederate General Robert E. Lee -- that left one dead and 19 injured after a car-ramming attack. Police arrested James Alex Fields, 20, and charged him with second-degree murder in the incident.

"Last week, the horrific displays of hatred at the University of Virginia and in Charlottesville shocked and saddened the nation," University of Texas at Austin President Greg Fenves said in a statement Sunday. "These events make it clear, now more than ever, that Confederate monuments have become symbols of modern white supremacy and neo-Nazism."