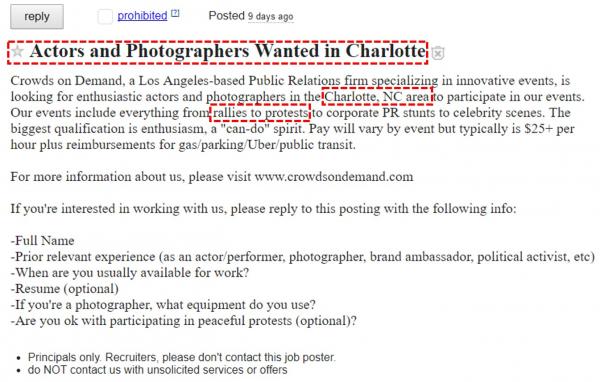 Trump ignited a political firestorm yesterday during an impromptu press conference in which he said there was "blame on both sides" for the tragic events that occurred in Charlottesville over the weekend.

Now, the discovery of a craigslist ad posted last Monday, almost a full week before the Charlottesville protests, is raising new questions over whether paid protesters were sourced by a Los Angeles based "public relations firm specializing in innovative events" to serve as agitators in counterprotests.

The ad was posted by a company called "Crowds on Demand" and offered $25 per hour to "actors and photographers" to participate in events in the "Charlotte, NC area."  While the ad didn't explicitly define a role to be filled by its crowd of "actors and photographers" it did ask applicants to comment on whether they were "ok with participating in peaceful protests."  Here is the text from the ad:

Actors and Photographers Wanted in Charlotte

Crowds on Demand, a Los Angeles-based Public Relations firm specializing in innovative events, is looking for enthusiastic actors and photographers in the Charlotte, NC area to participate in our events. Our events include everything from rallies to protests to corporate PR stunts to celebrity scenes. The biggest qualification is enthusiasm, a "can-do" spirit. Pay will vary by event but typically is $25+ per hour plus reimbursements for gas/parking/Uber/public transit.