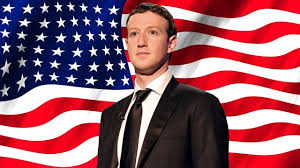 Look at that. Do you see it? The pieces are sitting there on the table. All we have to do is fit them together.

But it's as if a Medusa head has been cut up into a jigsaw puzzle; simply piecing it together would create a picture too ghastly for anyone to behold. So I'll let you assemble the picture for yourself:

For his annual "personal challenge," Facebook CEO Mark Zuckerberg has vowed "to visit every state I haven't spent time in before to learn about people's hopes and challenges, and how they're thinking about their work and communities."

He is having lunch with South Dakotan ranchers and hanging out with Ohio steelworkers and other Rockefeller-handing-out-dimes-level staged PR claptrap.

He has inserted an exemption in his corporate succession plan to ensure he can still run Facebook if he leaves the company to go serve in government.

And, most tellingly, he has suddenly seen the light and renounced atheism in favor of a more voter-friendly stance: "I was raised Jewish and then I went through a period where I questioned things, but now I believe religion is very important."

Ugh. It's too horrific to even write this sentence, but here goes: Mark Zuckerberg, Overlord of the Evil Facebook Empire, is running for President.