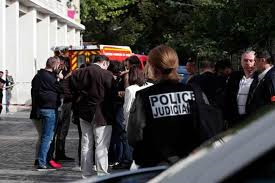 Car rams into soldiers near their barracks outside Paris

Vehicle took off after the incident, police say

Officers involved in shootout on motorway in northern France

Sources say one man was shot

Local mayor says it was 'without a doubt a deliberate act'

France has been in state of emergency since November 2015?

French police shot and arrested a suspect in the ramming of six soldiers near Paris on Wednesday after a dramatic car chase.

Le Parisien newspaper named the driver in the suspected terror incident as Hamou B, a 37-year-old from Sartrouville in the north western suburbs of Paris.

At least 300 police were mobilised in the manhunt, which ended on a motorway in northern France, after what police said was a "complex and dangerous intervention".