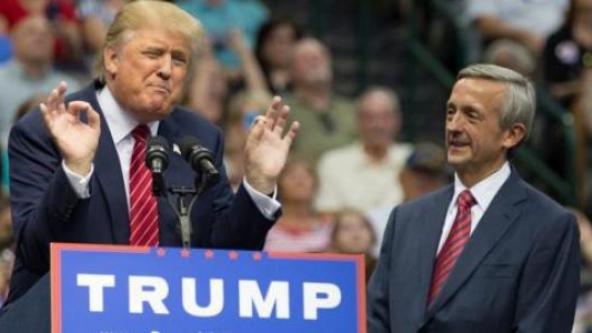 A well-known evangelical pastor and spiritual mentor for President Donald Trump asserted Tuesday that God won't mind if the president wipes North Korean dictator Kim Jong-un off the face of the earth.

Southern Baptist pastor Robert Jeffress, who has close ties to the president, believes Trump has the moral authority to destroy Kim Jong-un.

"When it comes to how we should deal with evil doers, the Bible, in the book of Romans, is very clear: God has endowed rulers full power to use whatever means necessary — including war — to stop evil," Jeffress explained in a statement to CBN News. Jeffress personally tweeted out the story from CBN News.

"In the case of North Korea, God has given Trump authority to take out Kim Jong-un," he added, stating, "I'm heartened to see that our president — contrary to what we've seen with past administrations who have taken, at best, a sheepish stance toward dictators and oppressors — will not tolerate any threat against the American people.