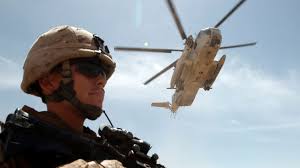 "Dwelling on the past is just not useful," not at least in the opinion of Brigadier General Roger B. Turner Jr., U.S. Marine Corps. General Turner's current duty station is Afghanistan, where he commands a modest conglomeration of Marines and sailors known as Task Force Southwest.

We might empathize with General Turner. After all, what's the point of getting hung up on the past when you are facing a dauntingly tough job in the here-and-now? That job requires Turner to do what a run of previous U.S. military commanders have been attempting to do without notable success for almost sixteen years: to pacify Helmand Province. Were he to reflect too deeply on the disappointments of those sixteen years— the U.S. troops killed and wounded, the billions of dollars expended, all to no evident purpose—Turner just might reach the conclusion that he and his charges are engaged in a fool's errand conceived by idiots.

We don't want brigadier generals entertaining such heretical thoughts about basic U.S. national security policy. Their proper role is to implement, not to formulate; to comply rather than to question; to do or die not to wonder why. So General Turner's reluctance to dwell on the course that the Afghanistan War has followed since U.S. troops entered that country in 2001 qualifies as prudent and perhaps even necessary.

Unfortunately, the officials who issue Turner his marching orders seemingly share in his reluctance to contemplate the past. The people back at the White House and in the Pentagon who should be thinking long and hard about why America's longest war has gone so badly even as it drags on and on appear incapable or unwilling to do so. A willful amnesia prevails.

In a moment of candor, Defense Secretary James Mattis remarked not so long ago that the American war effort in Afghanistan has entered what he calls a "strategy-free time." Mattis is on the record as vowing to fix that problem by mid-July. That deadline has now arrived. The promised strategy has not.

Reporters I talk to tell me that the Trump administration remains deeply divided on how to proceed in Afghanistan. The internal debate appears to mirror the one that played out in 2006 when the George W. Bush administration wrestled with what to do with an Iraq War that had gone badly awry.

At that time, the Pentagon convened a so-called "Council of Colonels" to study the situation and identify available alternatives. The group, which included a rising star by the name of H.R. McMaster, came up with three basic options. They were: 1) Go Big, 2) Go Long, or 3) Go Home. Ultimately, President George W. Bush opted, in effect, for a combination of 1) and 2). The result was the Iraq Surge of 2007-2008.