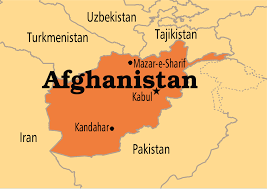 Just when you think that you have heard all of the asinine ideas possible about U.S. involvement in Afghanistan, out comes one that is so hideously ridiculous that you must assume the authors are demented and writing from a well-secured asylum.

The quote below comes from an article about the future of U.S. involvement in Afghanistan that was in the USA Today Network on 14 July 2017. The article discusses several U.S. options in Afghanistan, but the one that takes the cake is the brainchild of two champions of the war in Iraq, who — as Tucker Carlson correctly said about Max Boot — can be relied on to propose ideas that will start unnecessary and always losing wars for the republic. The article's authors are Michael O'Hanlon, an analyst from the Brookings Institution, who was orgasmic over invading Iraq, and the former general/now-felon David Petraeus, who lost the war in Iraq and helped lose the one in Afghanistan The article refers to some recent work by these two brain-dead beauties.

"O'Hanlon also co-authored a piece in the Wall Street Journal with former CIA Director and four-star general David Petraeus that takes aim at most of the opposing views of continuing the war and argues that the U.S. must consider Afghanistan the center of a generation-long fight against extremism with no definition of "victory." (1)

Mr. Trump, these two men are war-mongering, elitist, money-grubbing idiots. There is no need for the United States to participate in "generation-long fight against extremism" that is centered in Afghanistan; indeed, there is no longer any plausible reason for America to be engaged in any war in Afghanistan. U.S. military forces have been there since October, 2001, and the security situation in the country is far more in favor of the Taleban — and increasingly the Islamic State — than it was 16 years ago, not even Kabul is secure.

In addition, the morons of U.S. foreign policy-making have been involved in only part of what is now the Afghan Islamists' 40-plus year fight against foreign/infidel occupation, the first stirrings of which began in 1977-78 against the USSR's puppet communist regime in Kabul. In these 40 years the Afghan Islamists and their various allies — Pakistani mujahideen, al-Qaeda, Arab volunteers, Chinese Uighurs, etc. — have worn out all foreign occupiers, even though they had no air cover and little in the way of artillery or other heavy arms. The Soviets could not win with a 120,ooo-man Red Army force, and U.S. and NATO generals could not win with a force of the same size and air assets far greater than the Soviets employed.

You will note in the above quote, Mr. President, that the two geniuses want you to agree to a war that has "no definition of 'victory'". This, Sir, is because the two authors — and most U.S. and NATO generals — are chronic losers who never want to win a war, but only to prolong it so that the taxpayer gravy-train upon which they gorge continues forever. If your generals are trying to sell such slop — and Petraeus often speaks for that lot of losers, including McMaster — pull on you businessman's hat and recognize that these charlatans are trying to get you to sign a contract to build something that neither you nor anyone else can ever build (a stable, secular, democratic Afghanistan with an effective military); a contract that offers no hint of what the final cost will be in lives, limbs, and tax dollars; and a contract that has no completion date, and clearly states that the project may never be completed.